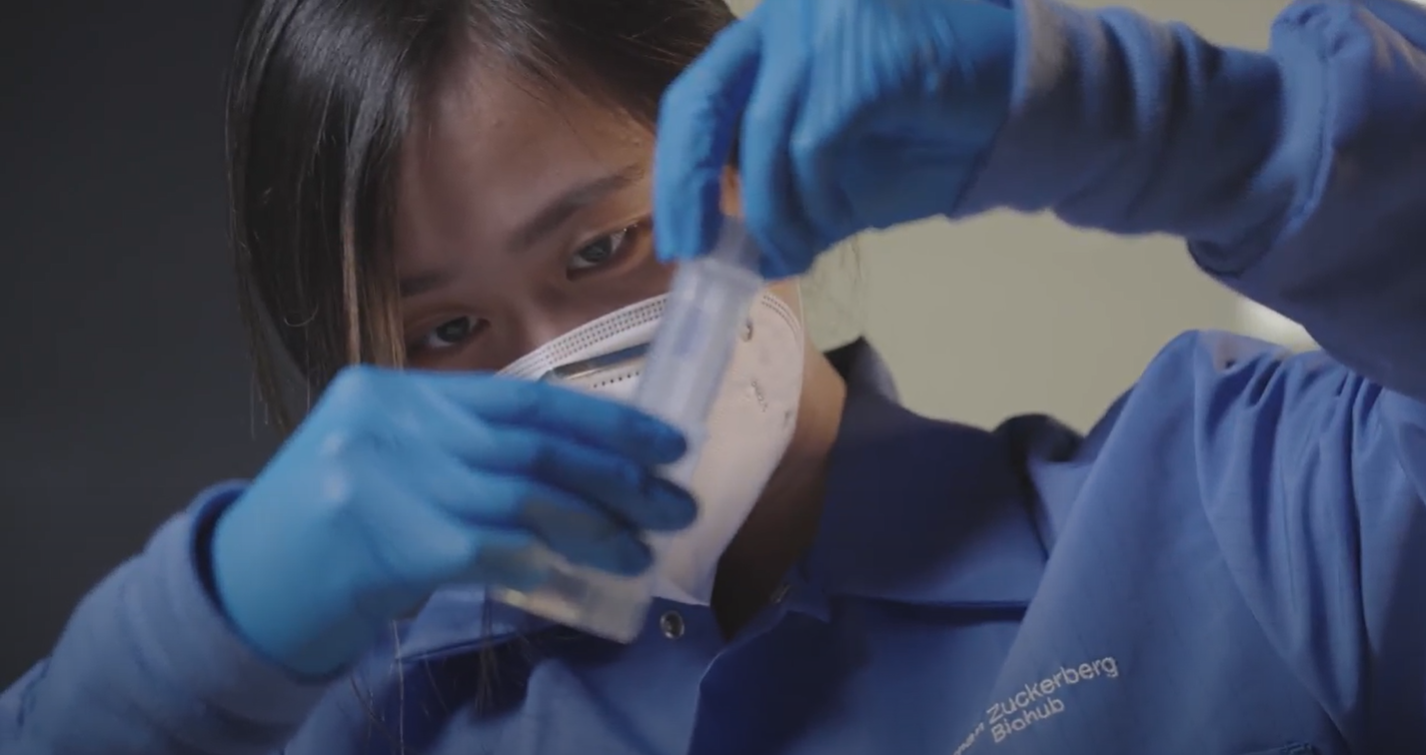 Scaling the CZ Biohub model to pursue the toughest and most important scientific challenges.

In December 2021, Chan Zuckerberg Initiative (CZI) co-founders and co-CEOs Dr. Priscilla Chan and Mark Zuckerberg announced a 10-year effort to develop the science and technologies to observe, measure, and analyze human biology in action. Over the next decade, CZI Science will focus on developing new research, institutes, and technologies that measure human biology in new ways to help deepen our understanding of human health and disease.

As part of this effort, and modeled on the success of the San Francisco-based CZ Biohub, we are forming a Chan Zuckerberg Biohub Network, in which new Biohubs will be created to bring together leading scientific and technology institutions with the goal of pursuing grand scientific challenges on 10- to 15-year time horizons. We’re selecting the next CZ Biohub in the Network through a competitive application process. It will be a sister organization to the existing San Francisco CZ Biohub, bringing together leading scientific and technology institutions that are within close geographical proximity to one another, with the goal of pursuing a grand scientific challenge.

Once selected, we expect that the next CZ Biohub will receive a 10-year funding commitment in the range of $200–250 million, with an anticipated launch in 2023. Based on the progress and achievements of this new CZ Biohub over that 10-year period, there is the potential for an additional 5-year commitment of funds, yielding 15 years of total funding. The final funding commitment for the selected new CZ Biohub will be determined based on the scope of the successful proposal and in consultation with the CZ Biohub Network leadership team. As with the CZ Biohub in San Francisco, we further expect that the next CZ Biohub will be structured as a nonprofit medical research organization and will enter into a Collaboration Agreement with its university/institutional partners. This will enable this new CZ Biohub to support research at its partner universities/institutions as well as provide faculty at those partner entities with access to a central research facility.

The ideal scientific themes will be interdisciplinary in nature, have large engineering challenges to conquer, and be wildly ambitious. The focus area of this new CZ Biohub will further diversify CZI’s existing research portfolio, which includes infectious disease and quantitative cell science (San Francisco CZ Biohub); neuroscience and artificial intelligence (Kempner Institute for the Study of Natural and Artificial Intelligence at Harvard University); and the Chan Zuckerberg Institute for Advanced Biomedical Imaging.

Steve Quake served as CZ Biohub founding co-President, with Joe DeRisi, from 2016–2021. In 2022, Quake transitioned into new roles, as head of Science at the Chan Zuckerberg Initiative, and as president of the CZ Biohub Network. As CZ Biohub Network president, Quake is leading an initiative to replicate the Biohub model in new locations and bring together leading scientific and technology institutions to pursue grand scientific challenges.

Quake, the Lee Otterson Professor of Bioengineering and professor of applied physics at Stanford University, does research at the nexus of biology, physics, and technology development. He has invented many measurement tools for biology, including new DNA sequencing technologies that have enabled rapid analysis of the human genome, as well as microfluidic devices that allow scientists to efficiently isolate individual cells and decipher their gene expression. Quake is also well known for his work inventing new diagnostic tools, including the first noninvasive prenatal test for Down syndrome and other aneuploidies; that test is rapidly replacing risky invasive approaches such as amniocentesis, and millions of women each year now benefit from this approach. His innovations have helped to radically accelerate the pace of biology and have made medicine safer by replacing invasive biopsies with simple blood tests. Quake’s early work in genome sequencing is highlighted in Euan Angus Ashley’s 2021 book, The Genome Odyssey: Medical Mysteries and the Incredible Quest to Solve Them.

As Chief Technology Officer of the CZ Biohub Network, bioengineer and University of California, Berkeley professor Amy Herr will help lead the Network’s efforts to advance technologies to observe, measure, and analyze human biology in action.

Herr is an award-winning innovator in bioinstrumentation focused on design and creation of tools to surmount “measurement gaps” in basic and translational biomedical science, most recently centering on difficult-to-measure protein forms in single cells. Her laboratory’s research—some of which has been commercialized—brings greater insight into basic life processes and disease progression, including resistance to cancer treatment.

Herr is the John D. and Catherine T. MacArthur Professor at UC Berkeley and a Chan Zuckerberg Biohub Investigator, and serves in various national and international capacities. She will continue in these roles while CTO of the CZ Biohub Network. Prior to these appointments, Herr was founding director of the Bakar BioEnginuity Hub and faculty director of Bakar Fellows Program, both at UC Berkeley.

In considering potential locations for the new Biohub’s central research facility, is the expectation that it would be space at one of the partnering institutions?

Not necessarily. For the Biohub in San Francisco, for example, the main site is in leased commercial real estate, while one of the outstations is in space provided by a partnering university.

Can the collaborating institutions be in the same university system, or be campuses of a single institution?

Does diversity play a role in your consideration for the next CZ Biohub?

One of the CZ Biohub values is “respect, inclusiveness and opportunity for all,” and we encourage efforts to improve diversity, both at CZ Biohub and in science generally.

Will the Chan Zuckerberg Initiative finance the build, furnishing, operations, and maintenance expenses of the next Biohub?

The funding commitment to the new Biohub will cover all facilities costs.

Do you expect the next CZ Biohub institutions to be within the same proximity of each other?

Institutions should be close enough that the various faculty involved can meet in person twice a month without substantial inconvenience, collaborations can easily be created, and shared facilities can be frequently utilized.

Did the Biohub accept LOIs from institutions outside the U.S.?

This year’s competition is limited to institutions in the United States, but we hope to consider applications from other countries in a future competition.

Are the terms and conditions of the Collaboration Agreement available to review in advance?

The terms and conditions of the Collaboration Agreement will be made available at a later stage of the selection process.

Can Biohubs include participants from governmental and/or other philanthropic organizations?

Yes. All governmental and nonprofit research entities are welcome to apply.

Can Howard Hughes Medical Institute Investigators play a role in a new Biohub?

HHMI permits HHMI Investigators to collaborate with CZ Biohub Investigators, and CZ Biohub and HHMI have enjoyed a number of successful collaborations over the past five years. We expect this will continue going forward, and we understand that HHMI has affirmed that their policies regarding collaborations with CZ Biohub have not changed. If you have specific questions about HHMI’s policies, you should contact your HHMI scientific officer.

Do hospitals/hospital systems qualify as research institutions to apply?

Yes, provided they are nonprofit organizations.

Is there a maximum number of participating research institutions in a given collaboration?

What happens if a proposal overlaps with CZI’s current research portfolio?

Questions about the CZ Biohub or the application process should be addressed to questions@czbiohub.org.

ABOUT THE CHAN ZUCKERBERG BIOHUB

The Chan Zuckerberg Biohub is a nonprofit research center that pursues large scientific challenges and brings together physicians, scientists, and engineers from Stanford University; the University of California, Berkeley; and the University of California, San Francisco. The CZ Biohub employs some of the brightest and boldest engineers, data scientists, and biomedical researchers who together with our partner universities seek to understand the fundamental mechanisms underlying disease and develop new technologies that will lead to actionable diagnostics and effective therapies.

ABOUT THE CHAN ZUCKERBERG INITIATIVE

The Chan Zuckerberg Initiative was founded in 2015 to help solve some of society’s toughest challenges — from eradicating disease and improving education, to addressing the needs of our local communities. Our mission is to build a more inclusive, just, and healthy future for everyone. For more information, please visit chanzuckerberg.com.