It seems that Carolina Arias was destined to be a virologist. As a little girl growing up in Bogotá, she often accompanied her mother, a bacteriologist, to her clinical lab and watched her analyze samples from patients to figure out what was making them sick. On these visits—quick stops on the way to a dentist appointment or coming home from school—Arias remembers peering into the clinic’s microscopes and marveling at how something so very small could wreak so much havoc and cause so much suffering.

When it was time for Arias to go to college, microbiology was the obvious choice, and after obtaining Bachelor’s and Master’s degrees in the subject from Colombia’s Universidad de Los Andes, she set off to tackle a Ph.D., studying herpesviruses and poxviruses at New York University School of Medicine.

Next was a postdoc at UC San Francisco, until, finally, Arias established her own lab at UC Santa Barbara, studying how viruses reproduce in human cells. 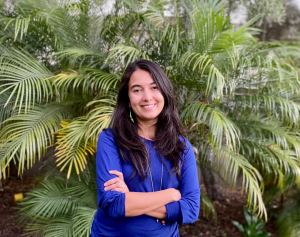 That’s where she was in January, 2020 when Chinese health officials first announced that a new coronavirus was behind the many mysterious pneumonia cases cropping up in the city of Wuhan. Given her expertise, Arias quickly became a resource for her university and for the Santa Barbara community at large as they grappled with the chaos of the early COVID-19 pandemic. Alongside her colleagues, she set up campus COVID testing, studied the behavior and transmission of the SARS-CoV-2 virus, and contributed to worldwide sequencing efforts aimed at tracking rapidly evolving viral variants.

This year Arias joined CZ Biohub’s Infectious Disease initiative as a Group Leader, and is building a lab to discover new ways to attack viruses based on how host cells respond to infection. We caught up with Arias to discuss her work during the COVID-19 crisis and how it led her to start her research program at the Biohub.

Much of your last three years were spent responding to the COVID-19 pandemic. How did you get involved?

I’m a virologist and this was a viral pandemic, so there was no way I wasn’t getting involved. Very early on—before we even knew if we had COVID  locally, the UC Santa Barbara chancellor asked some colleagues and me to participate in an advisory board for the university. We helped decide to close the campus early on, which likely prevented many cases.

It quickly became evident, though, that the main limitation was testing. At the beginning, as everyone remembers, it was impossible to get tests. So I teamed up with some colleagues, including my husband, who is a cell biologist, and we developed a CRISPR-based test for COVID that didn’t rely on the scarce reagents the existing tests required. Using our test, we could see that COVID was spreading in our community, and we identified some COVID-positive individuals who had no idea they were infected and were possibly infecting others.

Later I led the establishment of a certified lab in Santa Barbara that now can test 4,000 individuals a week and which has helped us learn more about COVID transmission patterns and behavior. My team also participated in sequencing SARS-CoV-2 genomes and developing tests for specific variants to help track the disease’s spread with more precision.

So while most people were locked down at home, you were working under urgent conditions. That must have been intense.

It was super-intense! We were one of the few labs operating in our area and the university was a total ghost town. The eerie quiet outside contrasted quite strangely with the emotional energy of working at a constant sprint in the lab because tests were so desperately needed.

I also have two young children who, at the time, were obviously out of school, and there was no childcare available. That meant my husband and I were working in chunks. One of us would be in the lab for four to six hours while the other worked from home, and then we’d switch. In between, we’d find time to spend with our girls.

Are there things you learned during that period that you’re going to carry with you going forward in your work?

I think the main lesson in every regard is that collaboration is so powerful. It was a very bad situation. It was a dire situation, it was chaotic, it was as crazy as it could be. But it showed us that by working together and communicating, we could move at the speed of light. Usually, scientific labs work in relative isolation, but in this case, many labs were working together and we were in close contact with local clinicians and community health officials. Projects that would normally take months were done in days or weeks, because everybody was fully committed and we were sharing information. As a scientific community, we really put forth some awesome discoveries, great biology and important templates for future responses that were all made possible by working together.

Did that impact your decision to come to the Biohub?

Collaboration is a word that everybody throws around, but in the pandemic, it became real on a level we hadn’t seen before. People were saying “Look, I’ll lend you my expertise and you’ll lend me yours and we both know our limitations.” Then, the moment you’re done with your part and can’t move further forward, you hand things off to the next person. The Biohub model is a lot like that. At the Biohub everyone leaves their ego at the door. There’s no “my research” or “my group” or “my paper,” and that’s why, as an institution, we can take on these big enterprise projects that need the expertise of many different people who are all willing and able to communicate with each other.

Now that the pandemic may be winding down, what projects are you working on at Biohub?

One thing I’m really excited about is comparing how different viruses work—particularly how they make their proteins. All viruses out there are very different from one another. They have different genomes and they replicate differently. But every single virus, from Zika to Ebola to herpes, has to use its host to make proteins. That gives you the opportunity to look for a common vulnerability that all viruses have, because they all depend on these resources from the host cell. To attack us, all viruses depend on our cellular machinery. The question, then, is what is the cellular machinery that viruses depend on, and can we somehow disable those factors to disable a virus? Could we use that information for the development of broad-spectrum antivirals? I really think there’s a gold mine there that we are just starting to realize exists.

What do you enjoy doing outside the lab?

I love going to museums and I love dancing—it’s one of my favorite things in the world. I did ballet throughout high school, and I like dancing to all kinds of Colombian music—salsa, merengue, cumbia, you name it. But I’m a parent, of course, so my biggest priority is spending time with my kids. They were so understanding and resilient during the lockdowns, so we really want to take advantage of just having fun as a family.