Which is why, when Ranen Aviner was an undergraduate, turning down offers of admission to several prestigious graduate programs around the world was a pretty easy decision. “I stayed at the same university for my graduate work, because I already had a great group of people that I really liked working with,” he says.

The camaraderie and collaborative spirit of his graduate program is something Aviner has strived to preserve throughout his professional career, he says, “because science is most productive and most exciting when you have a team of people who are equally excited to explore similar questions.”

This summer, Aviner began a joint appointment at the Chan Zuckerberg Biohub as a Group Leader in both Quantitative Cell Science and Infectious Disease, launching a lab primarily focused on studying the connections between ribosome function and human diseases. He has a strong interest in both infectious and neurodegenerative conditions, such as Huntington’s disease, and plans to build interdisciplinary collaborations that would bridge the gap between virology and neuroscience.

“It is very exciting for me to join an institute that is a work in progress and that I can help shape in years to come,” Aviner says.

Growing up in Tel Aviv, Israel, Aviner’s parents instilled in him a love and appreciation of the arts, particularly music. But his curiosity embraced a wide variety of subjects – nature, animals, writing, photography. “I had a really hard time deciding which of these interests and passions to pursue,” he says. 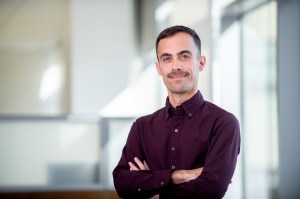 Aviner began his college education at Tel Aviv University after completing his required stint in the Israeli military. When it came time to decide on a degree program, Aviner thought Biology might be broad enough to sustain his interest while giving him a few different career options. But he wasn’t convinced research would captivate him enough to make it his career. As a backup plan, he found a job working for a medical translation agency, shaping medical reports into easy-to-comprehend documents. “I figured if science didn’t pan out, then at least I would have a career in something else,” he explains.

A career in scientific research would eventually win out over becoming a full-time medical writer, but that position revealed skills in writing and editing that taught him the importance of effective science communication, Aviner says. “Science doesn’t happen in a void, so the impact and the meaning of the scientific work we do is in direct proportion to how we communicate it.”

As a doctoral student under the mentorship of Orna Elroy-Stein, Aviner studied how ribosomes – the cellular machinery responsible for producing proteins from instructions coded in RNA – perform and regulate protein synthesis. As part of this research, he designed and validated a method for identifying newly synthesized proteins. Called puromycin-associated nascent chain proteomics, or PUNCH-P, the technique allows scientists to catch errors in protein synthesis – particularly errors associated with disease – as soon as they happen, making it easier to uncover the culprit and potentially design a way to stop it.

For his postdoc, which straddled the labs of former CZ Biohub Investigator Judith Frydman at Stanford and Raul Andino at UC San Francisco, Aviner aimed his research more directly at human health – specifically the mechanisms of viral infection. “Much of what we know about the basic mechanisms of ribosome function comes from research on viruses,” he says. “So I thought viruses were a wonderful model system to explore the kinds of questions I’m excited to ask.”

As Aviner explored how viruses affect ribosome function and protein synthesis, Frydman proposed that he use a similar approach to examine the role ribosome function plays in Huntington’s disease. Researchers had recently discovered that the mutated gene responsible for Huntington’s, HTT, somehow causes ribosome activity to slow down, to the point of being detrimental to the cell. Aviner was intrigued, as his father has Alzheimer’s disease, a neurodegenerative disorder with similarities to Huntington’s. More than the personal connection, however, Aviner was excited to contribute toward a better understanding of an invariably fatal disease that affects millions of people around the world.

But almost as soon as he got started, the COVID-19 pandemic hit, locking him and his colleagues out of the lab for several months. “We were forced to rethink our priorities and r tools of work,” he says. With prospective lab experiments canceled for the foreseeable future, Aviner used the time to dig into the literature to see what he could learn by integrating his own preliminary data with published datasets.

So, Aviner turned from the lab bench to his computer screen. “There is such a wealth of information that has already been generated for Huntington’s disease, and similarly for many other diseases, in terms of gene expression, patient profiles, and cellular and animal models,” he says, but there is very little work done trying to integrate these previously published findings.”

This work led him to discover that ribosome dysfunction over time leads to increased susceptibility to cellular stress, which is a new hypothesis to explain why patients typically only show symptoms of Huntington’s disease between the ages of 30 and 50, even though they carry the genetic mutation that causes it from birth.

As he embarks on recruiting the first members of his new Biohub lab, Aviner says  that he hopes to attract junior and senior scientists who want to be part of a scientific community as diverse, creative, and supportive as those he’s been a part of thus far. “I deeply care about mentoring,” he says, “because elevating the people I work with is a priority for me.”