Who’s feeding the fish?
The robot!

The small but hardy zebrafish (Danio rerio) is a blue-striped freshwater minnow that has long been a favorite in home aquariums. The fish are also prized by developmental biologists as a model organism: they have a quick gestation period and grow rapidly, and their bodies are transparent during early development, allowing scientists to observe organ development under the microscope in real time.

But just like fish in a home aquarium, lab fish have to eat. For researchers working with zebrafish, this often means sacrificing precious time off to pop back into the lab to feed and care for hungry fish.

“I’m a zebrafish aficionado—I love them,” says Chan Zuckerberg Biohub Senior Scientist Merlin Lange, who studies zebrafish development in Loïc Royer’s Quantitative Cell Sciences research group. “But it was kind of annoying to always have to come in on the weekend to feed them!”

Lange and his team grew tired of drawing straws to see who would come in during their time off to feed the fish. After failing to find any commercial options to automate the process, and in keeping with a Biohub motto—“If it doesn’t exist, we’ll build it”—Lange, Royer, and their colleagues decided to pursue a homegrown solution.

The result is the Zebrafish Automatic Feeding device, or “ZAF” for short, a sleek robotic system that can be programmed to distribute food to many individual fish tanks at a designated time. The feeder “saves your weekend,” Lange says, but more importantly the device also makes feeding more regular and uniform, which avoids introducing unwanted variables in experiments arising from subtle differences in manual feedings.

Lange, Royer, and their team began building the first generation of ZAF about three years ago as a side project, with the help of Software Engineer Ahmet Can Solak, Research Fellow Hirofumi Kobayashi, Research Associate Shruthi VijayKumar, and Optical Engineer Bin Yang. The group created a first-generation system that was relatively simple, but still rewarded them with some well-deserved time away from the lab on weekends and holidays.

Then, when pandemic-related closures began making access to the lab more difficult, Lange and his colleagues redoubled their efforts to create ZAF+, a more robust version of the system. “ZAF+ gives you more control over the amount of food distributed to individual tanks and it can be controlled on a touch screen controlled by a computer,” he says. 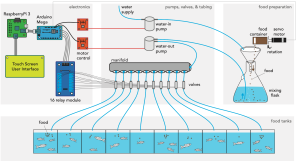 The ZAF+ system has a touch-screen interface that allows users to prepare and distribute food to many tanks, with the ability to vary the amount of food dispensed based on the number of fish in each tank. (From Lange et al., eLife 2021;10:e74234 DOI: 10.7554/eLife.74234)

The team ran tests on both systems for two months, to make sure they didn’t cause any problems for the fish. Neither system had any effect on zebrafish health or spawning, or on the water quality in the tanks.

Maintenance of the ZAF systems is minimal. “In theory, we could probably leave the stock of food for weeks,” says Lange. But to provide the best care they can for the fish, someone from the team does a 10-minute check on the fish and their food supply every two to three days. Then, once every 10 weeks or so, the team will do a deep cleaning of the system, which takes about two hours.

Beyond building ZAF for their own convenience, Lange and his colleagues hope other researchers will make use of this novel system. To that end, the team has published an open-access paper on ZAF, and has posted all the blueprints, instructions, and software needed to build and operate a ZAF system in a GitHub repository, allowing users to build a custom system to meet their needs.

“One of the best parts about this feeder is that anybody can build it,” says Lange. “You can buy everything you need for it on Amazon.”

By making ZAF free and accessible, the team at CZ Biohub hopes to build a community of users that can help one another develop new and improved versions that can suit a variety of research needs.

“The more labs use ZAF,” Lange says, “the more likely we are to find issues and work together to develop the next generation.”

Keir Balla doesn’t have all the answers, and that’s exactly how he likes it