We’re accepting joint applications from universities and other research institutions to create the next Biohub in the network.

In all, 22 interns spent part of their summer at CZ Biohub labs in San Francisco or Stanford.

Like many research institutions, during the summer months Chan Zuckerberg Biohub has welcomed interns at all levels—from high schoolers to graduate students—into its labs.  In the Biohub’s early days,  these positions were supported in a relatively informal way, without a focused recruiting strategy or structured onboarding and training sessions for new interns.

Since joining the Biohub in January, Hochderffer has applied her long experience in that realm to the other end of the STEM pipeline, by both formalizing and focusing the Biohub’s internship program. “My first priority when I joined was to revamp our program,” she says, “specifically with a lens towards increasing underrepresented Black, Indigenous and People of Color populations in the STEM field.”

As in other competitive fields, internships in scientific research provide many advantages to those who obtain them. Aside from lab experience, there are less-tangible benefits, especially the ability to meet and build networks with scientists who can provide invaluable advice and mentorship to those just starting out in research. Because informally structured internships tend to be secured by those who already have some connections to scientists, however, many research internships have been criticized as perpetuating patterns of bias and inequity in the early pipeline to STEM careers, ultimately leading to a lack of diversity in tenure-track academic positions and senior administrative jobs.

Hiring Hochderffer is just one of many actions CZ Biohub has taken over the past three years to further diversity, equity, and inclusion, both within the Biohub and in the larger STEM ecosystem, says Sonya Zilka, senior vice president of human resources. “Collaboration has always been a towering strength of the Biohub—both within and outside our walls. Research has shown that diversity of thought, ideas, and perspectives lead to greater creativity and innovation. Building more diverse teams and fostering an inclusive environment where we can fully realize the value of diverse perspectives is what we hope to achieve. Culture change and evolving the STEM ecosystem will take time, but we are committed to intentional actions that will build a more diverse STEM universe in the future.”

To lay the foundation for that work, in 2020, under Zilka’s guidance, the Biohub formed an Internship Task Force that redesigned the internship program and set new goals. As part of that work, a week-long series of Biohub Fundamentals Workshops for new interns, which would cover everything from general onboarding and orientation to primers on scientific techniques and protocols, were created by Research Associates Lienna Chan and Katie Travisano along with Bioinformatics Scientist Saba Nafees.

To find the best candidates, Hochderffer and Human Resources Generalist Claire Freeman did proactive research using LinkedIn and other tools, but also created a virtual “roadshow” that they presented via Zoom at target institutions to make potential interns aware of opportunities at the Biohub, including at Historically Black Colleges and Universities (HBCUs).

An early ally in Hochderffer and Freeman’s efforts was Christina Muhammad, program manager for Morehouse School of Medicine’s Undergraduate Health Science Academy (UHSA). UHSA’s mission is to provide mentorship and opportunities for undergraduates with an interest in biomedicine who are part of the Atlanta University Center Consortium, an academic network of three HBCUs in Atlanta, Ga.—Morehouse College, Clark Atlanta University, and Spelman College. 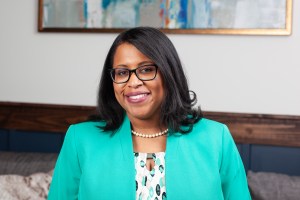 Harris, who used CRISPR techniques developed for the Leonetti group’s OpenCell project during his internship, says that learning about the Biohub internships was particularly welcome in a year when the COVID-19 pandemic has curtailed many opportunities for undergrads to gain research experience.

In Pak’s lab Delk employed the dCas9 enzyme to bind long sequences of DNA for genomic analysis. Delk says she’d been “on the fence” between careers in genomics and public health, but that interacting with the Biohub’s experts in genomic epidemiology—including Cristina Tato, director of the Rapid Response Group, and Patrick Ayscue, senior biosecurity fellow in Rapid Response—inspired her to consider pursuing genomic epidemiology in a global context.

Due to COVID cutbacks, Whitfield had been unable to gain wet-lab experience during the school year, but he completed a project on extracting and measuring DNA at the Stanford Biohub.

Taylor, who said her lab experiences at Spelman had also fallen off due to COVID, was able to help implement a new single-cell sequencing protocol using the 10x platform at Stanford. “That was a ‘big’ lab experience. It was amazing,” says Taylor, who adds she’d strongly consider applying for a Biohub internship next summer.

Angela Pisco, who hosted four students, says that interns “are a great energy boost over the summer,” and that she makes an active effort to integrate interns as full team members—they are invited to join all lab meetings and encouraged to share their views in any discussion.

“I like to give interns a project they can really own because that gives them the freedom to explore,” says Pisco, associate director for bioinformatics in the Quantitative Cell Science initiative. “From a mentor’s perspective, I benefit so much from all their fresh ideas on problems we want to solve. Most of my interns contribute to work that ends up in publications, and I think it is truly rewarding for them, and for me, that they have something to show from their time at Biohub. Even without any previous experience, this summer’s interns worked tirelessly in collaboration within our team, and with the Genomics and Sequencing Platform team, to help us build a COVID Tissue Atlas from scratch.”

In all, 22 interns, 13 of whom worked on site (three at Stanford), spent part of their summer at the Biohub; 4 were returnees who had been interns at Biohub previously. In addition to the four UHSA students from Atlanta, the Biohub was host to:

“This new approach to our internships has been wonderful,” says Theory Group Leader Greg Huber, who in an unofficial capacity helped oversee the Biohub’s internships for the three years when they were largely publicized by word-of-mouth, and most recruiting relationships were with Bay Area institutions. “This increases the scope of what we can do. We can now reach the entire country, and we could even reach people in other countries, in principle. In its first three years, the internship program was crawling along like a caterpillar,” says Huber, “but in 2021 it emerged from its chrysalis as a butterfly.”