Like Lewis Carroll’s Red Queen, cholera bacteria and their viral nemeses run a never-ending race just to keep up with each other

We humans are locked in an age-old, unending arms race against disease-causing bacteria, with resistant strains continuing to emerge that can fend off our best antibiotics. But bacteria themselves have waged a long back-and-forth war against the viruses that attack them, which are known as bacteriophages, or phages for short.

Bacteria have evolved sophisticated antiphage defenses, most notably CRISPR-Cas9 systems, and in turn, phages fight back with anti-CRISPR strategies. In this microbial arms race, bacterial and phage systems are continually coevolving just to sustain the battle. The weapons and countermeasures deployed by bacteria and phages are now the subject of intense study, both to understand how they impact endemic and recurring outbreaks of bacterial diseases, such as cholera, and to identify novel mechanisms or potential drug targets that might eventually be used to treat bacterial or viral infections. 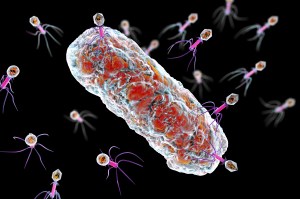 The bacterium Vibrio cholerae, which is responsible for cholera, multiplies in the human intestinal tract, causing severe diarrhea and often death. Cholera is endemic in some countries, such as Bangladesh, where contaminated drinking water transmits V. cholerae through populations. Severe cases are treated with antibiotics, but new therapies are being considered that would deploy the phages that attack V. cholerae, known as vibriophages, against the bacteria. A roadblock to such phage therapies, however, is the rapid evolution of phage resistance, which arises in V. cholerae and other bacteria.

Generally, bacterial antiphage defense systems are encoded by so-called mobilome or defense-island genes found on mobile genetic elements (MGEs). MGEs are segments of DNA that can be transferred (or can transfer themselves) from the genome of one bacterium into the genome of a neighboring bacterium, in many cases through tube-like pili by a mechanism called conjugative transfer. Some MGEs are phages themselves—they are able to infect bacteria without killing them and integrate into their genomes. MGEs also encode offensive weapons for bacteria that increase pathogenicity and provide antibiotic resistance. Indeed, the deadly cholera toxin secreted by V. cholerae is itself encoded by a gene once carried by a vibriophage that has since integrated into V. cholerae’s genome.

To better understand the adaptations that promote fitness in V. cholerae in changing conditions, and how phages then adapt to overcome bacterial challenges as they arise, Chan Zuckerberg Biohub Investigator Kim Seed’s research group at UC Berkeley is studying bacterial MGEs that dynamically transform over time, what drives those changes, and what new mechanisms phages use to keep up with them.

“We think MGEs are really the key to adaptive evolution in V. cholerae—it’s how this organism is able to cope with various environmental stresses,” says Seed. “It’s not about diversification of the core genome, or subtle mutations; rather it’s the gain and loss of these MGEs that’s defining V. cholerae’s fitness.”

Working ‘in the wild’

Researchers in Seed’s lab have previously focused much of their work on an evolutionarily conserved MGE for phage resistance called PLE, and have now become keenly interested in identifying additional V. cholerae MGEs as a strategy for identifying new genes that confer phage resistance. Their studies of PLE have also helped to identify phage-encoded counter-defenses, but these systems have proved challenging to study with laboratory bacterial strains, which often are not the native prey of specific phages, and so don’t recapitulate the natural phage–bacteria interplay.

To overcome these challenges and observe real-world competition and evolution between V. cholerae and vibriophages, Seed and her team have taken advantage of the fact that vibriophages that rumble with V. cholerae in the intestinal tract are excreted along with the bacteria in the feces of infected patients.

With colleagues at the International Centre for Diarrhoeal Disease Research in Dhaka, Bangladesh, her group has been analyzing phages and bacteria isolated from patient stool samples to study their co-evolving relationship; the samples were collected over a 34-month period between 2016 and 2019, and are supplemented by numerous samples from public databases dating as far back as 1987. As Seed notes, “The approach is a little different from a lot of other groups. We rely on clinical samples to be able to isolate bacteria and phages to look at what’s going on in nature and over time.”

As described in a paper published July 30, 2021 in Science, the Seed group used comparative genomics—comparing the sequences of V. cholerae found in the stool samples across time—to identify a gene cluster that shifted along with the bacteria’s susceptibility to a dominant strain of vibriophage, called ICP1, over the sample period. They found that this relatively large cluster, which had already been identified as an antibiotic-resistance element called SXT, wasn’t always present in the samples and that its exact DNA sequence changed over time.

This striking shape-shifting behavior was underscored by the fact that, by 2018, an entirely new V. cholerae lineage had taken over the population compared to the previous period, making clear the benefit of using natural samples. “We weren’t looking for a relationship between phages and SXTs, but that’s what we found,” says Seed.

Helped by previous computational work from others that had identified several defense genes, they looked at the SXT genes more closely, and identified one known phage-resistance system, called BREX, along with other candidate antiphage genes, such as restriction enzymes, that were always present—albeit ever-changing—during periods when the bacteria were successful at combating the vibriophages.

Beyond the discovery of such phage-resistance mechanisms, other benefits of looking at natural samples as they change over time include being able to appreciate the consequences and trade-offs of phage resistance. In this case, Seed’s team found that despite its short-term benefits, SXTs limited the bacterial cells’ ability to acquire other MGEs, including those that, like cholera toxin, may benefit V. cholerae by maintaining its pathogenicity.

On the other hand, the improved ability to acquire MGEs in strains lacking SXTs provides a tidy explanation for their ability to exist in the wild, despite the loss of the antibiotic properties and phage resistance that SXTs encode. In addition, phages that have infected bacteria lacking SXTs don’t have an opportunity to adapt themselves under the SXT pressure and so may not be as capable of surviving when they are released into the wider bacterial community.

While bacteria are changing over time, bringing genes in and out along with their associated susceptibilities and resistances, phages are also defending themselves to remain viable. In this case, the research team discovered a small anti-BREX protein, OrbA, made by phages enriched in the Bangladeshi samples. Genetic variations between different phages that led to the loss or gain of OrbA expression tracked with the loss or gain of BREX resistance, which helped the team identify OrbA as an anti-BREX factor.

Not to be outdone, V. cholerae SXTs continually diversify their DNA sequence and can even be excised from the genome of one bacterium and transferred to another one that might have a better chance of surviving, Seed’s group found.

Bacterial MGEs provide a handy mechanism for acquiring and shuffling genes that provide adaptation or resistance to phages, and Seed’s group is trying to figure out how much of the V. cholerae genome is comprised of MGEs. “We have been stunted by a lack of comprehensive knowledge of what MGEs even exist,” she says. “There are a lot that are not discovered, so we need to start from scratch.”

The ceaseless battle between bacteria and phages is fought with rapid evolutionary adaptations that must strike a balance between the benefits and fitness costs at every step, ensuring that neither opponent gets the upper hand with any new successful mechanism for long enough to completely sweep the community.

As Alice muses in Carroll’s Through the Looking Glass as she peeks at the fight between the Red and White Knights, ″I wonder, now, what the Rules of Battle are. . . . One Rule seems to be, that if one Knight hits the other, he knocks him off his horse; and, if he misses, he tumbles off himself.”