Music, dance, cell culture – Leila Njoya does it all.

When her grandfather came home from the hospital after having a stroke, Leila Njoya was thrilled to have him back at the dinner table. She went to bed that night feeling relieved that he  was well enough for doctors to send him home. But the next morning she learns, to her shock, that her grandfather has died.

“How could that happen?” she asks today. “Did he know? Did he not want to say anything if he was feeling a little off?”

Motivated by that experience, Njoya, a 2022 graduate of Spelman College in Atlanta, plans to become a medical doctor and researcher, with the goal of helping doctors provide better care for their patients – particularly Black and minority patients, who often receive inferior health care.

As a step toward accomplishing that goal, Njoya applied for the Chan Zuckerberg Biohub’s summer internship program. “I knew she was a great intern prospect,” says Amy Kistler, a group leader in the infectious disease initiative at the Biohub. “At one point during her interview she exclaimed enthusiastically, ‘I just really want to get into the lab!’”

Njoya thrived with Kistler’s mentorship, and this fall she moved into full-time employment at the Biohub as a research associate, continuing her work on viral replication and translation in Kistler’s lab.

“I definitely recommend the Biohub for new researchers,” Njoya says. “It’s a great place because everyone wants to help propel your career and provide that stepping stone for you. I’ve had such a great experience.”

Getting a taste for science

Njoya has fond memories of shadowing her mother, a nurse, at the hospital where she worked in Minneapolis-St. Paul, Minnesota. Although Njoya credits those experiences as planting the seed for her future career aspirations, it wasn’t until later in college that she solidified her goal to work in health science.

Before that, “I thought I was going to be a Michelin Star chef,” Njoya says. “I do a lot of cooking!” Having grown up eating her mother’s and grandmother’s traditional West African cuisine, she developed a passion for cooking that she still savors today.

A talented artist and musician, Njoya also entertained the idea of a career in the arts, possibly playing the clarinet – her primary instrument. But once she decided on a biology track in college, she realized she wouldn’t have time to continue with music as much as she used to. “In college, most musicians are music majors and I was committed to pursuing biology,” she explains.

So she opted to exchange her clarinet and sheet music for a lab coat and pipettes. Science courses at Spelman came easily to Njoya, despite two years of exclusively virtual learning in the middle of her college career due to pandemic-related closures. And as a member of the Undergraduate Health Sciences Academy at Morehouse School of Medicine, Njoya had the opportunity to network with healthcare professionals and participate in on-campus internships.

During her senior year, she learned through the Academy about the CZ Biohub summer internship program. The timing couldn’t have been more perfect, she says, as a choice between taking time off from education or diving straight into medical school was starting to weigh on her. After having to juggle several online courses for more than a year, she wasn’t quite ready to jump into prepping for the MCAT, so a hands-on internship at the Biohub seemed like a great fit.

“Now that I’m taking a gap year as a research associate, I’ve learned there’s no rush to get into med school.” Living through the pandemic was mentally and emotionally draining, she says, and made her realize that she wants to “live life a little bit” before committing to medical school. The break from school has also allowed her to appreciate the bench science involved in medicine, she says. “The projects I’m working on at the Biohub have the potential to contribute to the knowledge of viral replication and transcription, which may ultimately translate to a clinical impact.”

As an intern, with Kistler’s mentorship, Njoya generated cell lines expressing fluorescently tagged L polymerase, or large polymerase – the protein responsible for triggering RNA replication in Zaire ebolavirus. She learned how to genetically modify cells, clone them, and grow those specialized cells and tissues in culture. 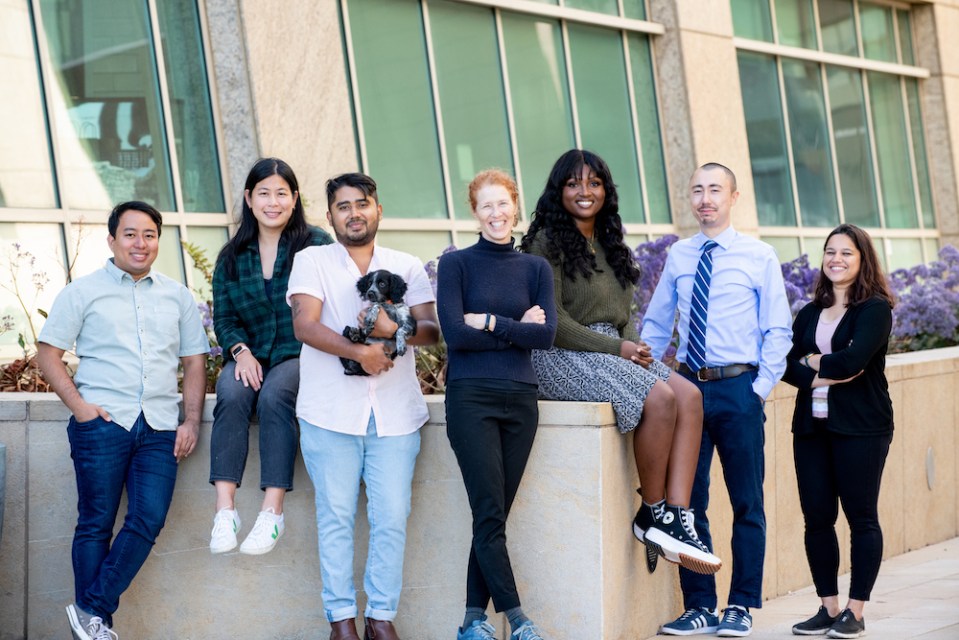 Kistler worked closely with Njoya and was “impressed by the work she did, and also with Leila’s ability to take in new material and to ask questions without hesitation if a term or concept I was using was unfamiliar or unclear to her,” she says. “I was continually impressed with her careful, attentive listening and enthusiastic curiosity about the ‘why’ of our experiments – her drive to deeply understand and master the work she was doing.”

These carefully crafted cell lines now help the Kistler team study how the virus replicates and transcribes its DNA.

In addition to learning a wealth of research techniques at the Biohub over the past several months, Njoya also picked up a new favorite hobby: salsa dancing. “I was obsessed with it during the summer! The other interns thought it was funny and would say ‘Leila acts like salsa dancing changed her life,’” she says with a laugh.

As research associate, Kistler says, “Leila’s continuing the next steps on the project she started during her summer internship, which is a new area of research for my group related to immunoprecipitation-mass spectrometry analysis of the host proteins that interact with diverse viral replication and transcription complexes.” Njoya is also expanding on the skills she learned over the summer to generate new cell lines for studying another species of ebolavirus, and says she’s motivated to continue learning within the creative and inspiring atmosphere of the Biohub.

“Everyone is so collaborative and open. I’m enjoying being this immersed in science,” Njoya says. “There are so many different groups of scientists studying diverse, innovative things at the Biohub, and everyone is talking about science, so you can really learn a lot.”

Seeing malaria in a new light