Fatherhood has had a major impact on Steve Quake’s scientific career. Years ago, when Quake and his wife were expecting their first child, a prenatal exam quickly took a startling turn. The doctor recommended amniocentesis to test the fetus for health problems, and without much warning, “the guy just turned around with a giant needle in his hands and pokes it right through my wife’s belly,” Quake recalls. “Like, holy shit!”

Amniocentesis—in which a bit of fluid is drawn out from the mother’s womb to allow doctors to test for potential genetic abnormalities—was then a fairly common procedure, of course, and many expectant parents welcomed the opportunity to test for disorders that can come with lifelong physical and mental challenges. However, though complications are rare, the invasive nature of amniocentesis can be distressing for patients, and does come with some risks: infection, needle injury, and miscarriage.

There had to be a better way to do this test, Quake thought.

He didn’t know it then, but this highly personal moment for Quake, now president of the CZ Biohub Network, would be the seed for some of the most important work of his career. What started as a worry for his wife and unborn child would eventually lead him to have a hand in multiple breakthroughs in noninvasive medical testing, through advances in the study of the genetic material that regularly slips into the bloodstream from cells—known as “cell-free” DNA and RNA.

In a study reported in the February 9  issue of Nature, Quake and Mira Moufarrej, a graduate student in his lab, joined a team of Stanford and CZ Biohub scientists—including the Biohub’s Genomics Platform Leader Norma Neff, Angela Detweiler, and Honey Mekonen, as well as former Biohubbers Rene Sit and Michelle Tan—to show that cell-free RNA can be used to perform early screening for preeclampsia. This serious high-blood pressure condition of pregnancy can quickly turn dangerous for both mom and growing fetus. The new study complements concurrent work by South San Francisco–based Mirvie, published in Nature in January, which also used cell-free RNA to predict pregnancy complications.

Back in 2001, at the time of his wife’s prenatal exam, Quake, a physicist by training, was pioneering the development of novel microfluidic devices for a number of biochemical applications, including cell-by-cell counting of biological molecules. He had no formal medical training, but shortly after his wife’s amniocentesis, he stumbled across an article describing how, during pregnancy, DNA from the developing fetus escapes the womb to circulate in the mother’s blood.

“The lightbulb went on,” he says. 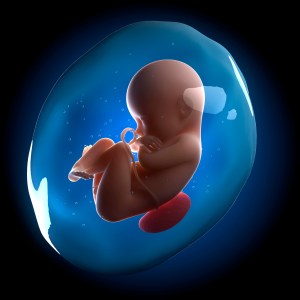 In this computer rendering, the fetus is seen in the amniotic sac, surrounded by the fluid sampled for amniocentesis.

Quake realized that if he could apply his expertise in quantifying DNA to maternal blood, he might be able to test whether a baby had a genetic disorder without needing to extract amniotic fluid. The amniocentesis Quake’s wife had undergone was to test for aneuploidies, disorders that arise when a fetus inherits the wrong number of chromosomes. In Down syndrome, for example, which is characterized by intellectual disability and high risk for a variety of health problems, children carry a third copy of chromosome 21.

What if instead of plunging a needle into the fluid surrounding the fetus, Quake and colleagues asked, doctors could simply look for abnormal fetal chromosome numbers by drawing blood from the mother’s circulation? As reported in a 2008 study published in Proceedings of the National Academies of Science, the idea worked. The research team reported that women carrying babies with Down syndrome had higher numbers of chromosome 21 in their own blood, and just three years later, Quake’s method began entering clinics around the world.

Quake’s second child had already been born by then, but he still felt the impact of what his team had created, and it impressed upon him the power of patient-centered research. Even though there was little momentum within medicine at that time to find alternatives to amniocentesis, patients clearly wanted options. “I became a hero to all the neighborhood moms,” Quake says.

But this was just the beginning of Quake’s new obsession with quantifying genetic material floating around in the circulatory system. Even as their Down syndrome test was being developed for the clinic, Quake and colleagues were back in the lab looking into other ways they could use molecular characterization of cell-free DNA to reduce the need for invasive testing for other conditions.

Today, Quake has helped advance research into using cell-free DNA to track the growth of cancerous tumors and to examine the microorganisms that colonize our bodies. And over the last decade, Quake and colleagues developed a test to detect organ rejection in transplant patients by looking for an increase in circulating DNA from the donated organ, a signal that cells from the transplanted organ are dying; the test now spares patients from needing painful biopsies every two months after receiving a transplant.

“These are cases in which there are two or more genomes, which makes looking at DNA in blood very useful,” Quake says. “You can use tricks to distinguish the genomes to see what’s going on with a fetus, a tumor, microbes, or transplanted organs and you wind up with powerful tests that don’t require an invasive procedure.”

Too much of a good thing

It’s rare for any medical test to be one-size-fits-all, however, and Quake cautions that even the most powerful tests can be misapplied. Making tests safer, cheaper, and less invasive is usually a good thing, but if that leads to overzealous and indiscriminate testing, it can sometimes come with results that are confusing or just flat-out wrong.

A recent New York Times investigation exposed how this very issue has arisen from the Down syndrome test Quake helped to create years ago. As businesses began to develop similar tests for increasingly rare genetic disorders—so rare that large validation studies often couldn’t be done—the new tests, which are not regulated by the U.S. Food and Drug Administration, began delivering an alarming number of false positive results to expectant parents.

“The tests initially looked for Down syndrome and worked very well,” write journalists Sarah Kliff and Aatish Bhatia. But “the grave predictions made by . . . newer tests are usually wrong.”

While Quake agrees that the medical community needs to be vigilant, and that inappropriate diagnostic applications of cell-free DNA “need to be called out,” he thinks many available tests are beneficial. With careful validation and thoughtful administration, he says, such tests are a tool for “advancing equity in the health system,” because they are affordable, accessible, and safe.

“It really makes the power of the genome revolution available to anybody, anywhere,” he says. “To me that’s the most important piece of this.”

And DNA is just part of the picture. Lately, RNA—DNA’s more ephemeral partner—has been capturing a substantial amount of Quake’s attention. While DNA is often described as an organism’s blueprint and (for the most part) is exactly the same across all the cells of your body, RNA shows up as short-lived cellular memos, couriers for the machinery that executes the moment-to-moment goings-on of our cells. But just like DNA, RNA gets into the bloodstream and can be analyzed by scientists who want to know what’s happening in our tissues in real time.

“DNA tells you about mutations and genetic problems, but very few things are dictated solely by genetics. RNA tells you about your current physiology, which is a much broader landscape of health and disease. It’s incredibly informative,” says Quake, a point of view he recently put forth in an essay in Trends in Genetics titled “The Cell as a Bag of RNA.”

Indeed, his newer interest in RNA has brought Quake back to his long-time interest in prenatal testing, but this time with applications that have been even more elusive.

New advances in high-throughput sequencing and computation have enabled the use of cell-free RNA to measure gene expression across all systems of the body at once. In a 2018 Science paper, Quake and colleagues reported using this approach to identify a set of genes whose expression could help predict gestational age of a developing fetus more precisely and warn of risks for preterm birth.

These developments come as researchers around the world have undertaken new efforts to fully characterize the transcriptome—the full range of RNA transcripts that carry information about gene expression throughout the body over time. CZ Biohub’s Tabula Sapiens, for example, is a “transcriptomic atlas comprising nearly 500,000 cells from 24 different human tissues and organs.” Its creators hope it will eventually contribute to new insights in how to use RNA as an indicator to track the progression of diseases like fatty liver disease, Alzheimer’s and more.

“We’re still at the very beginning of the cell-free RNA story,” Quake says. “But it’s clear there’s going to be many discoveries and applications to come.”